MY ACCOUNTTHAIENG
You are here: 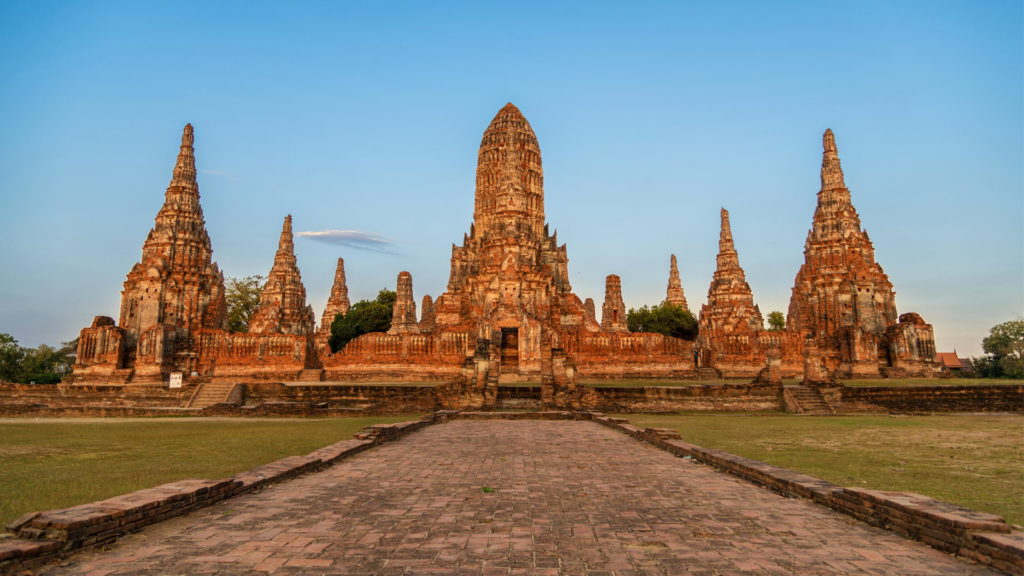 With long periods of Thailand’s History, according to evidences and studies, Sukhothai was the first kingdom of Thailand. At that time, an early Thai script was invented by King Ramkhamhaeng, the great king of Sukhothai, and there also were records about events in the king’s reign. After Sukhothai period, the new kingdoms arose that are Ayuthaya, Thonburi and Rattanakosin which is the present kingdom of Thailand. Each period owns its important Historical events and interesting cultural changes.

In Sukhothai period, King Sri Indraditya founded Sukhothai in 1238 governed by the monarchy system. The glorious era was in the reign of King Ramkhamhaeng the Great and after his death, it came to the fall of Sukhothai Kingdom.

In Ayuthaya Period, King U Thong founded the kingdom in 1350, and the kingdom then became powerful in politics and economy of southeast Asia. Ayuthaya became stronger by firmly gathering groups of Thai and connecting to foreign countries such as Portugal, France, Netherlands, China, and Japan. In 1569, Ayuthaya’s glories fell to Burmese, then King Naresuan regained the city’s independence and expanded more territories. In the era of King Narai was the rise of international relations, but later because of the big war, Ayuthaya Kingdom was destroyed by Burmese troops in 1767. That was the end of Ayuthaya period.

After the destruction of Ayuthaya period, King Taksin collected his troops to defeat Burmese troops and chose Thonburi as the new capital. After his death, King Yot Fa (Rama I) founded Chakri dynasty and decided to move the capital to Bangkok, so it was beginning of Rattanakosin period.

King Rama I was the first king of Rattanakosin. In the early period, there was an invasion from Western countries. The kings at that time solved the problems by trading and making agreements with the Western countries for preserving the independence even the country lost some territories.

In 1932, Thailand had a big change of the country’s government system, from the absolute monarchy system to the present democratic system with the King as the Head of State.

Fossilized remains of plants and animals have been discovered in many areas of Thailand, particularly in the Korat Plateau in northeastern Thailand. Most of the animal fossils found are of dinosaurs, which date primarily to the Jurassic era though some are from the late-Triassic, the oldest such evidence of dinosaurs in southeast Asia.

The dinosaur bones encased in sandstone in the Phu Wiang hills of Khon Kaen province included Phuwiangosaurus sirindhornae, a gigantic plant-eating dinosaur that had a long neck and tail and a small head.

Four other species of dinosaur unearthed in Phu Wiang include Siamotyrannus isanensis, a smaller version of Tyrannosaurus rex, Siamosauraus suteethorni, a crocodile-like creature, Compsognathus, the world’s smallest dinosaur, and Ornithomimosaur, an ostrich-like dinosaur.

Homo erectus fossils have also been discovered in Thailand. Known as the Lampang man for its discovery in Lampang province, the remains have been dated to roughly 1,000,000 – 500,000 years ago in the Pleistocene Era.The first evidence of humans living in modern-day Thailand was discovered at Ban Chiang, near Udon Thani in northeastern Thailand; grave sites and artifacts including bronze tools and pottery provide evidence of a society that is thought to have had knowledge of rice cultivation and occupied the area continuously from 2100 to 200 BCE, spanning the Neolithic to the Iron Age.

Over the centuries leading up to the era of recorded history, Thailand was first peopled by Mon and Khmer groups and later by the Tai, an ethnic group that migrated from southern China to Vietnam and gradually into Laos and northern Thailand.

In the first millennium of the Common Era, Tai people had dispersed across Yunan, Vietnam, Laos, Thailand, and Myanmar fragmenting into various linguistic sub-sects. Relatively minor players in the region throughout this period, the Tai inhabited the northernmost reaches of Southeast Asia, sandwiched between the kingdoms of Nan Zhao, Pyu, and Angkor.

Beginning in around the 2nd century CE, the Srivijaya Empire of Sumatra expanded its reach up the Malaysian Peninsula into southern Thailand. nakhon Si Thammarat and Chiaya, Surat Thani were founded during this period to facilitate trade across the Isthmus of Kra.

Around the 6th to the 9th centuries, the fertile central plains were inhabited by a Mon civilization known as Dvaravati. Distinct from its neighboring kingdoms of Chenla and Angkor, Dvaravati remains a mysterious civilization that established cities surrounded by moats and earthen walls, with Lopburi serving as an important religious center and Nakhon Pathom near Bangkok possibly its ‘capital’. While much is unknown about this realm, the Dvaravati had well established internal and external trading routes that were important to the development of Thailand and left a wealth of Buddhist artwork that testifies to the great influence indian Culture and religion had on the region.

From the 9th to the 11th centuries the Khmers of Angkor expanded their kingdom to include most of modern-day Thailand, with important provincial cities established at Phimai, Lopburi and even Nakhon Si Thammarat. Over several centuries many facets of the Khmer culture were imposed on/absorbed by the native population, which was becoming increasingly Tai as those populations migrated south. The temples at Phanom Rung, Phimai, and Lopburi are enduring testaments to this period of Thai history.

Throughout the reign of Angkor, Lopburi often asserted its independence and was clearly an important center for burgeoning Syam culture. The Chinese, who referred to emissaries from the region as representing “Hsien” or Siam (as it was apparently pronounced) documented a request from Lopburi requesting independence from Angkor as early as 1001.

In northern Thailand, Buddhist scholars from Lopburi founded a city-state known as Haripunjaya in Lamphun, northern Thailand around the 9th century (a Mon enclave that remained independent until the 13th century). Elsewhere in the north, the Tai people were fanning out and establishing their own city states, notably at Chiang Saen, where one of the first powerful Thai kingdoms, Lan Na, was originally established in the 12th century. The establishment of Lan Na, Sukhothai, and Phayao, three allied kingdoms founded by contemporary leaders, represents the beginning of the Thai history as we know it.

Thais began to emerge as a dominant force in the region in the 13th century, gradually asserting independence from existing Khmer and Mon kingdoms. Founded by Khun Pha Muang and Khun Bang Klang Thao in 1238, the Kingdom was named by its rulers “the dawn of happiness”. The Sukhothai Period is often considered the golden era of Thai history, an ideal Thai state in a land of plenty governed by paternal and benevolent kings, the most famous of whom was King Ramkamhaeng the Great (c.1279-98), who greatly expanded the Kingdom’s borders.

In addition to developing some of the most beautiful Thai art, the Sukhothai Kingdom is credited with developing the modern Thai alphabet. However, following the death of King Ramkamhaeng, the mightier state of Ayutthaya gradually exerted its influence over Sukhothai.

Following the death of King Ramkhamhaeng, the kingdom of Sukhothai rapidly declined and Lan Na expanded its influence over its neighboring kingdoms, many of which were former suzerains of Sukhothai. In the middle of the 15th Century Lan Na arts and literature reached a pinnacle during the King Tilokoraj period. However, after the king’s death, Lan Na weakened due to internal conflicts and Chiang Mai fell under Burmese control around 1564; while the Burmese occupied the northern region for a few centuries, they did little development, using Chiang Mai as a military base from which to battle the Kingdom of Ayutthaya, a mighty kingdom in the central plains that was gradually exerting its influence from the mid 14 th century onwards.

The Ayutthaya kings adopted Khmer cultural influences from the very beginning. No longer the paternal and accessible rulers that the kings of Sukhothai had been, Ayutthaya’s sovereigns were absolute monarchs and assumed the title devaraja (god-king). The early part of this period saw Ayutthaya extend its sovereignty over neighboring Thai principalities and come into conflict with its neighbors. During the 17th century, Siam started diplomatic and commercial relations with western countries. In 1767, after repeated attempts, the Burmese invaded and successfully captured Ayutthaya.

Despite their overwhelming victory, the Burmese did not retain control of Siam for long. A young general named Phya Taksin and his followers broke through the Burmese lines and escaped to Chantaburi. Seven months after the fall of Ayutthaya, he and his forces sailed back up the Chao Phraya River to Ayutthaya and expelled the Burmese occupation garrison, though tragically the capital had been looted and nearly razed.

General Taksin, as he is popularly known, decided to transfer the capital from Ayutthaya to a site nearer to the sea, a move that would facilitate foreign trade, ensure the procurement of arms, and make defense and withdrawal easier in case of a renewed Burmese attack. He established his new capital at Thon Buri, on the west bank of the Chao Phraya River, opposite modern-day Bangkok. The rule of Taksin was not an easy one. The lack of central authority since the fall of Ayutthaya led to the rapid disintegration of the kingdom, and Taksin’s reign was spent reuniting the provinces.

After Taksin’s death, General Chakri (Rama I) became the first king of the Chakri Dynasty, ruling from 1782 to 1809. His first action as king was to transfer the royal capital across the river from Thon Buri to Bangkok and build the Grand Palace. Rama II (1809-1824) continued the restoration begun by his predecessor. King Nang Klao, Rama III (1824-1851) reopened relations with Western nations and established trade with China.

King Mongkut, Rama IV, (1851-1868) may have achieved western fame through the story “The King and I”, but won the hearts of Thais for his accomplishments including the establishment of treaties with European countries, thus avoiding colonialization, and modernizing Thailand through many social and economic reforms. King Chulalongkorn, Rama V (1869-1910) continued his father’s tradition of reform, abolishing slavery and improving the public welfare and administrative systems.

Educational reforms, including compulsory education, were introduced by King Vajiravudh, Rama VI (1910-1925). During the reign of King Prajadhipok, Rama VII (1925-1935), Thailand changed from an absolute monarchy to a constitutional monarchy. The king abdicated in 1933 and was succeeded by his nephew, King Ananda Mahidol Rama VIII (1935-1946). The country’s name was changed from Siam to Thailand with the advent of a democratic government in 1939. Our current monarch, King Bhumibol Adulyadej (R. Jun. 9, 1946 – present), is King Rama IX of the Chakri Dynasty.

Language in Thailand
March 30, 2022
Go to Top
Manage Cookie Consent
Website: www.orientavista.com/en provide the best experiences, we use technologies like cookies to store and/or access device information. Consenting to these technologies will allow us to process data such as browsing behavior or unique IDs on this site. Not consenting or withdrawing consent, may adversely affect certain features and functions.
Manage options Manage services Manage vendors Read more about these purposes
View preferences
{title} {title} {title}